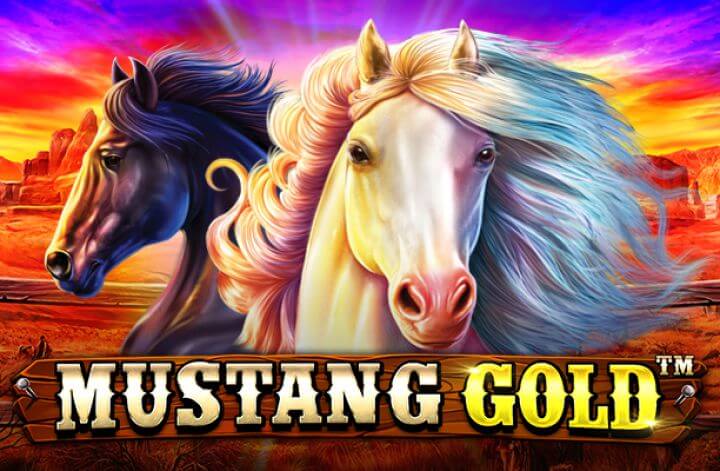 It’s a Wild West type of theme, with wild horses being used as the main characters, as you’d expect.

Mustang Gold will feature special symbols with images of logos, campfires, horseshoes and sheriff badges, but the top paying symbols will have white and black horses, along with male and female cowboys.

The last four symbols are the lower value options, which use Royals.

One of the newer companies in this market, Pragmatic Play was founded back in 2015. They’ve quickly expanded and started releasing slot machines at a pace that plenty of other developers can’t sustain.

They did this with over 100 employees, which are based in Malta. They won awards, even though they’ve been around for only a couple of years, and these days they’re a force to be reckoned with. Some of their better games from the past include titles like Queen of Gold or Hot Safari.

Spending as little as $0.25 per spin will be sufficient to get Mustang Gold going. That’s going to be split among the 25 lines of the slot, with $0.01 wagers selected for each one.

You shouldn’t have major issues with Mustang Gold, the game has the most common features to offer, there is nothing too complicated that needs explaining in its case. It’s a 5 reel slot machine, with 25 active lines, same as a lot of other modern games.

The list of special features that are included in Mustang Gold isn’t the longest one around, but neither is it short.

It all starts with the wild symbol, represented here by the image of the game’s own logo. Showing up only on the last four reels, it’s not going to be able to pay anything directly since it doesn’t form its own combinations.

On the other hand, the game has these wilds and uses them in all sorts of regular combinations. The feature symbols can’t be replaced with wilds though.

Moving on to feature symbols, first, we have the Camp Fire, a scatter symbol shown on the 2nd, 3rd, and 4th reels.

Have three appearing at the same time, to get a small prize, along with 8 free spins.

Another one that’s important, and potentially very profitable, the Money Symbol takes the form of a Gold Horseshoe. You see it on the first four reels only, and in each round, this icon comes with a random value or with one of the jackpots.

To use the Money symbols, you need to land a Sheriff Badge Collect symbol on reel 5, in a round where at least one Golden Horseshoe is present on the first four columns. This allows you to collect all winnings from the Money symbols. You can also get access to a Jackpot Reveal bonus, through the same method.

Jackpot Reveal will include four types of jackpots, and the first one to appear three times as you unveil them will trigger its payout. 50X to 1,000X round’s stake can be paid in this feature.

A game that promises top payouts of up to 12,000x your bet, Pragmatic Play’s Mustang Gold still manages to be only a medium volatility slot machine (3.5 out of 5 rating).

Add to this the fact that the game’s Return to Player is set to 96.53%, another above-average figure, and it’s looking like a decent pick for anyone.

Mustang Gold delivers quite a bit of what you want to see in a modern slot machine, including its graphics, a good mix of features, above-average RTP and excellent potential payouts.