🥇 Mega Moolah Slots - Where in Canada?

The world’s most popular progressive jackpot network, with the games that have been getting the most attention for more than a decade now, Mega Moolah is available at most Microgaming powered casinos.

The developer has had plenty of popular games in the past, but none seem to be as playful as the ones which feature these four progressive jackpots. Each one is going to be seeded at a different value, so we have:

63 Mega wins have been recorded so far at Mega Moolah games, of 1 million EUR/USD/GBP/CAD or more, which is the value at which the jackpot is seeded at.

With average wins of over 5.4 million CAD, and with a top win of 18,915,721, Mega Moolah is the world’s favorite progressive jackpot network, and its games are the most played.

On average, the jackpot triggers every 8 weeks and 3 days.

It’s often a pain to find online casinos that offer Book Of Ra and all the other awesome slots Greentube has in their portfolio.

We’ve done the job for you. Below you’ll find legitimate sites with Novo games, fast payouts, and local banking options such as Interac and Instadebit for Canadian players.

Mega Moolah is the game that started it all (separate review available here), launched in 2006 and it’s still available today. It is also still doing great as far as payouts and popularity are concerned.

In exchange, this slot is capable of paying big via its four progressive jackpots, the main one being responsible for turning quite a few of its players into millionaires.

While the volatility is considered medium, at the same time its own RTP of 88.12% is way below what you’d find in a modern release. Luckily, the presence of those progressive jackpots does a lot to make Mega Moolah appealing.

You get a safari theme, with African wild creatures being main characters on its reels, where the Lion is the star.

As its major features, I would mention the wild, free spins, and 3x multipliers, which is all fine.

With an older design, below-average RTP, and medium volatility, you might not expect this to be one of the world’s most popular slot machines, and yet there is a lot to be said about the appeal of a prize that goes into the 7-8 figures range.

If we would take only the game on its own merits, then there wouldn’t be much reason for us to still give it attention these days, as there are a lot of slots which do better in every single area. 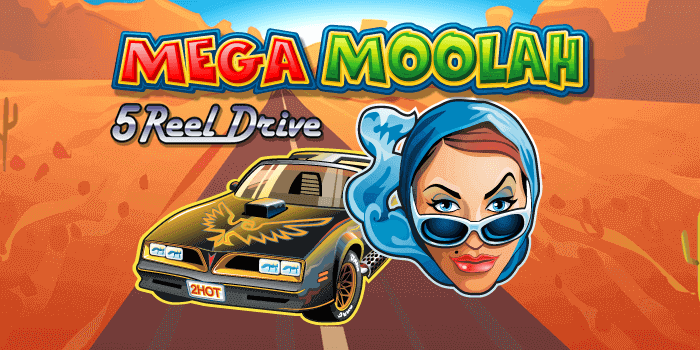 Released two years later, in 2008, 5 Reel Drive was the next Mega Moolah title made available to players. Capable of triggering the same progressive jackpot as the original, it changes some things in regards to its setup and potential payout.

Played on 5×3 reels and with up to 15 pay lines, it requires bets of up to $15 per spin, and in exchange it can pay 10,000 coins in exchange for its best combinations. It’s got higher volatility than the original, but it can trigger the same four progressive jackpots.

The graphics quality is not that different compared with the first Mega Moolah release, but the features do look better, now with 5x multipliers applied during the free spins, while regular wilds will also make appearances.

Mega Moolah Isis is the only game of the series to feature Ancient Egypt themed graphics, but it gets the attention of a lot of players.

It improves the features further, and now we find 6x multipliers during its free spins, along with 2x wild multipliers.

Combined, they help make the game one of the most exciting titles in this series, at least among the older titles.

Rewards of up to 10,000 coins are available from its best combinations, and yet the volatility is medium-high, and the RTP at 88%, so by itself it is not the most appetizing slot machine that you get access to these days.

Having the four Mega Moolah progressive jackpots to look forward to can do wonders for any game, that much is clear.

The expansion of the Mega Moolah network continued with Summertime, a game with a tropical vibe, but with a smaller number of lines than the others.

Looking at its symbols, you’re going to find mostly fruits and other classic icons there, along with the game logo (wild) and an image of a beach (scatter).

With 5 reels and only 9 active lines, the slot will be played with up to $90 per spin. The same rewards of up to 10,000 coins can come via its 5-symbol wild combinations, and the same symbols will double wins when they contribute to their formation.

The free spins also look good, thanks to 3x multipliers that apply to all wins obtained during the 15 rounds that will trigger.

It’s an OK alternative to the other older slots of the series, mostly trying to appeal to players that are into classics, as that’s the type of design and symbols that we’re looking at here.

After about a decade of having to play and try to win the Mega Moolah jackpots via the same couple of older slot machines, Microgaming has finally started releasing new games in the series.

They’ve started with Mega Vault Millionaire, where they’ve improved the graphics, but mostly kept the same features as in the other slots. This was an exclusive release for Casino Rewards sites.

In a game with 5 reels & 25 lines, we’re seeing the option to spin the reels with up to $6.25 wagers, and in exchange we’re getting paid up to 600x the stake. Wild symbols with 2x multipliers, or free spins where 3x multipliers boost prizes, are the main regular features offered.

Other than that, there is also the random Bonus Vault Wheel, which will pay a progressive jackpot when it triggers, though there is a high chance that it will be one of the smaller value options.

The same four jackpots can be triggered here as well, and the $1+ million dollar Mega prize is still the main reason why you would want to play this game.

Microgaming changed things up in this game though, which will trigger the random bonus game as a result of Pearls appearing as overlays on the middle three reels.

Depending on their appearance, and on how big your wager is that spin, there is a smaller or bigger chance of the feature triggering.

Other things have also changed here, including the fact that you get 5 reels & 10 lines where wins will form both ways or the mix of expanding wilds and re-spins which will act here as main features.

A game with medium volatility, Atlantean Treasures pays up to 500x on its own, while the RTP is set to 92.08%. 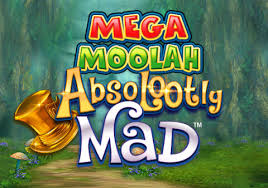 Things keep getting better and better in the Mega Moolah series, which has its next release coming out in May 2020.

Absolutely Mad is inspired by Alice’s Adventures in Wonderland, it has excellent graphics and a setup which brings 243 ways to win on 5 reels, for the first time.

Still, with an RTP of only 92.02%, it nonetheless improves on its payout potential, and with up to 2,343x that can be paid, it’s the best title of the series so far, if we look at potential rewards.

They’ve improved in the features section as well, so while the first couple of titles only had wilds, free spins, and multipliers to offer, now we’re seeing Multiplier Trails and Rolling Reels, besides the usual options.

As for the progressive jackpots, those will also trigger in a different way. You collect any Wild Hats that might appear, and this influences your chances of getting the Progressive Wheel to spin.

Released in 2006 with the first title of what would soon become Microgaming’s most successful series, Mega Moolah was initially only a jungle/safari-themed slot machine, but one which proved impressive thanks to its randomly triggered progressive jackpots, worth $1 million or more.

New games soon came out over the next couple of years, including titles like Summertime, 5 Reel Drive (2008) or Isis (2009), giving players a bit of variety in themes and features.

It wasn’t until over a decade later, that new games were added to this successful line-up, but now Microgaming seems to have big plans for the series, as they’ve already released three modern slot machines that are tied into the same network.

Over the years, the big prize of the network was triggered 63 times, and it continues to make several people millionaires each year, some even getting payouts in the 8-figures range.

Thanks to the new games of the series, titles like Absolootly Mad, Mega Vault or Atlantean Treasures, I expect for a renewed interest in these slots, and for new players to want to check them out.

❓ Who pays the Mega Moolah jackpot?

It’s Microgaming – the creators of the game. A common misconception is that it is up to the casino to give millions away to their lucky player, but that’s not true.

Every time you make a wager on the game, a small percentage (usually 2-3%) of that goes towards building the jackpot, which is held by Microgaming.

When the jackpot is won, this money is then given to the winning player.