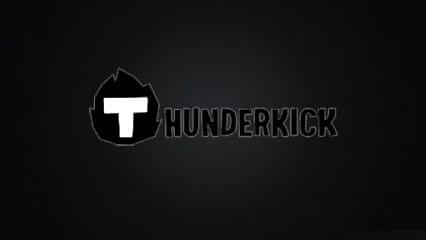 Thunderkick is one of the newcomers, having been founded post-2010. It is a Swedish software company that relies on a balanced team of young visionaries and experienced industry businessmen which has produced nearly 30 casino games so far and managed to get the attention of the online gaming world.

When Thunderkick first became known, several years back, it caused a big fuss. It represented something new, young, refreshing and exciting.

However, once the excitement dust settles down, it’s time to question their products and see if they are actually worth the trouble. By the looks of it, the company is in it to win it, creating rather unique video slots, recognizable and very well constructed.

They may not be the veterans in this, but they appear to know exactly what they are doing. And they keep their ambitions low key – all that is says on their website is ‘We are Thunderkick, and we make games!’

$100
T&C Apply
Amazing Loyalty Rewards Via The Wheel of Rizk
Withdrawal Flushing Option
One Of The Fastest Paying Casinos In The Business
Visit Casino!
Read Review

$2,000
T&C Apply
One of The Best 200% Match Bonuses In The Business
Monthly Prize Draw With a Mercedes Benz Car Up For Grabs
Deposits & Withdrawals Via Interac Available
Visit Casino!
Read Review
* Bonus awarded as a package worth aa total of $2000 on the first 3 deposits. 1st Deposit qualifies for a 200% bonus up to $2000. Min. Dep. to qualify $20. Skrill & Neteller excluded from the bonus. T&Cs apply to all bonus offers. 18+ Only. Please Gamble Responsibly. BeGambleAware.org

$1,000
T&C Apply
Slotnite available in French & English
Interac & Instadebit Deposits
The Loyalty Rewards are Credited as Bonus Cash WIth a 35x Wager
Visit Casino!
Read Review
* Bonus awarded as a package on the first 3 deposits. 1st Deposit qualifies for a 100% bonus up to $250. Min. Dep. to qualify $20. Skrill & Neteller excluded from the bonus. Free spins on Gonzo's Quest, Starburst and Twin Spin. T&Cs apply to all bonus offers. 18+ Only. Please Gamble Responsibly. BeGambleAware.org

$1,500
T&C Apply
Generous 4 Step Deposit Bonus Package
iGaming Cloud Platform for a Smooth Gaming Experience
Lightning Fast Withdrawals (Interac & Instadebit Accepted)
Visit Casino!
Read Review
* The Luckydays welcome package consists of 3 deposit bonuses: 1st deposit gives you 100% up to $500, 2nd 100% up to $500 and 3rd 100% up to $500. All free spins offered on Book Of Dead. Deposits made from Neteller, Skrill, paysafecard and ecoPayz are excluded from this offer.

The story behind Thunderkick’s rise to fame starts in 2012 when the company was founded in Stockholm, Sweden. Its founders are far from amateurs and beginners, with years of valuable experience gathered from heavy-weight brands such as NetEnt.

They’ve immediately established a straightforward motto, a healthy work ethic and a tight-knit team of experts, went to work and soon produced slots that propelled them straight into gambling heaven. Let’s be clear, Thunderkick is yet to acquire the status of an industry leader, but they’ve got dozens of beautifully designed slots under their belt and none can take that away from them.

Thunderkick operates as an individual software studio, and the word ‘independent’ truly defines what they are all about, for the most part. Surely, the brand must have had chances to expand, outsource and branch out, but they seem to have remained a small company by choice, keeping everything in-house.

That way, the best control and oversight of their products throughout the entire process of development is guaranteed. This doesn’t mean that they haven’t partnered up with significant casino brands, though. On the contrary, Thunderkick supplies games to over a hundred web-based casinos, including some of the best Canadian online casinos, too.

The focus fall exclusively on video slots, so you won’t see any video poker machine, roulette wheel or blackjack table developed by Thunderkick. What sets apart these slots from other gaming portfolios you may encounter on the web is their ‘fit and finish’.

The design is very high-quality and unpredictable. Even though small in number, their group of slots covers a lot of different formats and layouts, showcasing plenty of creativity and skill. Apart from a distinctly modern and sleek finish, Thunderkick’s products are volatile and dynamic in gameplay.

An average casino gamer clearly sees these games like adventures and they appeal to him, despite unorthodox themes (like Barber Shop – what’s that all about?!). Anyhow, there’s no denying that these games come with unique twists to them and that they bend the traditional norms of online casino slots.

Our Take on Thunderkick

It is hard to argue against the fact that Thunderkick produces really unique content. The graphics, animations, and sounds are their strong points, but also the ingenuity when it comes to shaping the gameplay and fitting in all the special features into a neat package.

There are two groups of players that don’t quite see the appeal – players who are obsessed with progressive jackpots, as Thunderkick doesn’t have any in its portfolio, and players who don’t appreciate all the cartoonish graphics used by this particular developer. Still, each of their latest releases has been highly anticipated in the gaming world, and that shows that we’re craving some more quirkiness from these Swedes.

Thunderkick’s range of games currently stands somewhere between 25 and 30 titles, with the first ones being Esqueleto Explosivo and Magicious and the most recent ones being Rocket Fellas Inc. and Tiger Rush. Esqueleto Explosivo was very successful, and that provided the company with enough confidence to produce their most popular slots such as Pink Elephants, Fruit Warp, and Flame Busters.

Pink Elephants is set in a pink dimension. Sounds crazy – but it’s so much fun. The game benefits from a 6×4 reel formation and offers 4,096 ways to win. Its strong sides are Mystery Scatters, free spins, symbol transformations and retriggers. If you haven’t seen pink elephants since you’ve watched the alcohol-fuelled sequence in Disney’s 1941 classic Dumbo, then this is your chance to befriend them.

Fruit Warp is a whole different animal, so to speak. It is a slot that is not quite a slot, very hard to describe but very fun to play. It revolves around flying fruit. Again, it sounds crazy, but it works. As you start the game you will see nine pieces of fruit floating inside a green fluid.

Hit the spin button and a new set of fruit will be shot at you, possibly creating a combo or three or more matching fruits. The Fruit Modes bonus feature is loaded with multipliers, so that would be your best bet at boosting your bankroll with this simple, yet extravagant game.

Flame Busters introduces you to Roasty McFry who’s trying to save a cat and the rest of the tenants from a burning building. The game has the 1980s feel to it and plays out like a retro arcade game.

Its structure depends on 5 reels and 3 rows of symbols which allow 243 ways to win. You can experience superb gameplay through various special features – the random Fire Drill, Fire Symbols transformations, and the Alarm Bell Free Spins. Although it looks dated, Flame Busters is as modern as it gets, a truly attractive online slot with clever features to support it.

For more Thunderkicking wizardry, you can try out slots like Frog Grog, a 23 pay line slot with the Frog Burp Multiplier and a Mystery Game, Spectra, which comes complete with Stacked Wilds and Nudges, but also Toki Time, Birds on a Wire, Zoom and Not Enough Kittens just because you won’t find anything similar with other providers.